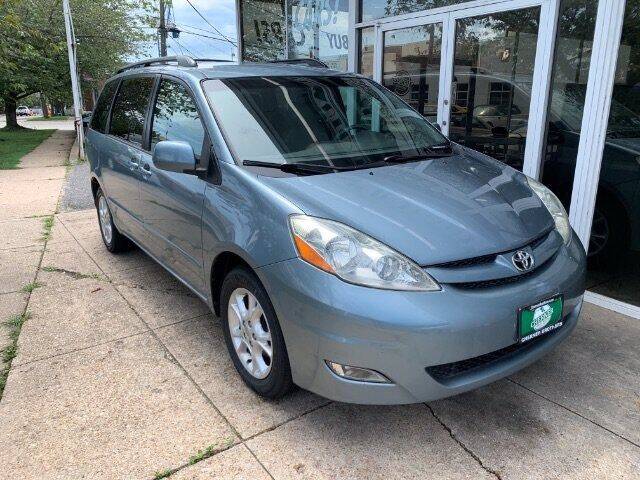 Ready for a test drive?
Let us know what works for you.
Have additional questions?
Give us a call and we'd be happy to help!

The Toyota Sienna is roomy, comfortable and does everything well. It's easy to live with and comes loaded with features that make life easier and more convenient. Everything operates exactly as people expect, so equipment struggles are rare. Its smoothness and convenience allows the vehicle to fade into the background while you go about your life. On the road, the Sienna delivers a smooth ride, responsive handling, and brisk acceleration performance. Its 230-horsepower V6 engine and five-speed automatic transmission deliver responsive throttle response while variable valve timing assures good fuel economy. The Sienna is rated to tow up to 3500 pounds. The Sienna has a strong reputation for safety. Front seat-mounted side-impact airbags plus side curtain airbags for all three rows are now standard on all models. A rear-view camera is available to help the driver spot objects or children behind the vehicle when backing up. All-wheel drive is available for more secure travel in foul weather well. In short, the Toyota Sienna is one of the best minivans available for 2006, and it may be the best. Completely redesigned for the 2004 model year, the Sienna features gets some upgrades for 2006. The styling has been freshened in the form of new headlamps and fog lamps, a revised grille, and redesigned tail lamps. A new power folding third-row seat for the Sienna Limited model makes switching from carrying people to cargo easier. The available rear-seat entertainment system features a larger, nine-inch LCD screen, while a universal mini-jack port now comes on all audio systems for connectivity to portable music players. New, power folding mirrors on 2006 Limited models feature puddle lamps and turn signals. New Optitron gauges, similar to those used by Lexus, come on 2006 LE, XLE and Limited grades.

Be protected. Check for open recalls:

Enter your phone number or email address to receive this VIN

Success! Your message has been sent.

Uh oh! There was an error sending your message. Please try again in a few moments.

By placing this call you agree to the Terms and Conditions of Use of this website and that this call may be recorded by Peninsula Motor Vehicle Group, using technology powered by Carsforsale.com, for business purposes.