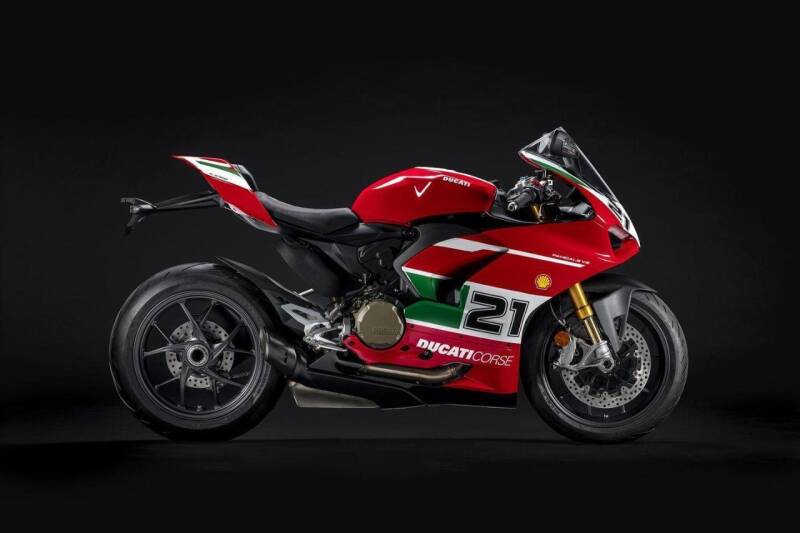 Ready to trade in?
Let us know what you have.
Have additional questions?
Give us a call and we'd be happy to help!

Ducati Panigale Bayliss 1st Championship 20th AnniversaryDucati goes Baylisstic with this tribute version of a legendary bike.Taking Orders Now ! First arrivals September 2021Call 905 847 0838 Peninsula Imports Ducati Oakville Ducati Panigale V2 Bayliss EditionTwenty years ago, Troy Bayliss gave Ducati a great gift, and now Ducati is repaying the kindness. Back in 2001, Bayliss rode a Ducati 996R to the first of three World Superbike championships he would deliver for the Italian company, followed up with titles in 2006 and 2008. While that&rsquo;s one championship short of Ducati&rsquo;s legendary ensign Carl Fogarty, Bayliss remains number one in the hearts of the Ducati SBK enthusiasts for his charming personality, his superb and daring riding style, and his overall versatility. (Don&rsquo;t forget that at the end of the 2006 season, with his second World Superbike title in the bag, Ducati gave him the opportunity to ride a Desmosedici in <a style="box-sizing: bo

Be protected. Check for open recalls:

For Customers outside of the US, add your phone number to the comments section when submitting a lead.

Enter your phone number or email address to receive this VIN

Success! Your message has been sent.

Uh oh! There was an error sending your message. Please try again in a few moments.

By placing this call you agree to the Terms and Conditions of Use of this website and that this call may be recorded by Peninsula Motor Vehicle Group, using technology powered by Carsforsale.com, for business purposes.